Home > Cool Stuff! > Short Story: Are We There Yet?

Short Story: Are We There Yet?

Melda Roache Clark shares another of her stories with us… (Thank you Melda!)

Are We There Yet?

Some things never change. Whenever our family gets together, the topic of conversation inevitably turns to Nova Scotia. Our children, love to reminisce about idyllic summers spent at Nanny and Grampy Roache’s house in West Head. In their minds, the little yellow house with a red roof atop a bald hill was heaven on earth.

As soon as the school year ended, my husband, Glenn, and I packed our little Dodge K-Car in a hurry. We crammed it full of everything needed for the summer. Early the next morning, we pulled out of our driveway in Peterborough, Ontario. Our destination was West Head, Nova Scotia, a tiny windswept village that juts out into the icy Atlantic Ocean.

We followed Highway 7 to Marmora, County Road 14 to Stirling, Highway 62 to Belleville and, at last, on to Highway 401. Glenn set the cruise control at 118 kph and away we went. Our first stop was at a service centre near Cornwall, Ontario. Along the way, we made a handful of stops for gas, food and bathroom breaks.

Glenn did all the driving and I tried valiantly to keep the peace. Each year the trip unfolded the same way. Between Marmora and Stirling, Allison taunted in a singsong voice, “I see Nanny’s house.” That was fight number one. I had to break the bad news that it was impossible to see Nanny’s house because it was over fifteen hundred kilometres away. That bought peace for a nanosecond.

Next came the complaint, “Allison’s sitting on my half of the seat.” That was fight number two. We pulled over and positioned our large Coleman cooler between them.  I piled it high with blankets and pillows. Jeremy and Allison soon forgot they were mad at each other and built forts with the blankets. That kept them entertained for a good chunk of time, but not nearly long enough.

Eventually, they lost interest in forts and Jeremy whined, “She’s looking out my window.” That was fight number three.

Allison shot back with, “Jeremy’s smiling at me.”“And what in the world is wrong with that?” I asked with a sharp edge to my voice.“He doesn’t mean it.”

That was fight number four. I threw up my hands in utter despair. It required the Wisdom of Solomon to rule on these matters.

“Dear God,” I begged,” what am I going to do with these children?” and only an hour had passed. Perhaps I was not up to the task.

It was not long until the dreaded “ARE WE THERE YET” question reared its ugly head. This year I was prepared because I had spent months crafting the perfect answer. I chirped, “We’re getting closer all the time.”

I depended on my years as a teacher to come up with games to keep them engaged. We played Road Sign Bingo, The Alphabet Game, Bury Your Horses, Twenty Questions, Hangman and I Spy. I read “Pippy Longstocking” from cover to cover. They catnapped occasionally, but we were still hundreds of kilometres from Nanny and Grampy’s.

Jeremy and Allison spent time trying to get truckers to honk their air horns. Jubilation broke out when it worked. God bless truckers!

One summer I came up with a brilliant idea, formerly known as bribery. I rubbed my hands with glee and patted myself on the back at the thought of it. My plan was designed to kibosh the petty fighting. I purchased a roll of quarters at the bank and explained the game’s only rule. Each time they whined or fought I would remove a quarter from the roll and put it in my purse. Jeremy and Allison could split the quarters left in the roll when we reached West Head.

Immediately, they began to daydream about myriad possibilities. Allison was going to spend her riches on chocolate bars. And Jeremy?  He planned to buy a fifty-pound bag of the hot pink peppermints that burn the taste buds off your tongue and the skin off your cheeks. My strategy reduced the fighting, but did not eliminate it. It definitely made the trip more bearable.

While I am by nature a patient and accommodating person, the trip had begun to exact its toll. With each passing mile, I was coming unglued. Beads of sweat broke on my forehead. My heart thumped wildly. Cortisol flooded my brain. A wave of nausea washed over me. My vision narrowed and sounds fades. Was I going to faint? I simply could not keep it together any longer. Like a robot, I opened my

mouth and could not believe what I said. My mother’s words and the words of every mother since the beginning of time tumbled out and I heard myself shouting, “Just wait until you have children of your own!”

After twelve solid hours of driving, we called it a day and stopped for the night at a motel in Edmunston, New Brunswick. We chose a motel with a pool so Jeremy and Allison could burn off their wiggles, but more importantly, to give our weary ears a much needed rest.

The next morning, we departed the motel for a second grueling day of driving. By late afternoon, we pulled into Nanny and Grampy’s familiar laneway. A brand new adventure–filled summer awaited. The car doors flew open and Jeremy and Allison took off running. They had to check out the hens, the goats, the sheep and any other critters Grampy had acquired. After that they disappeared into Grampy’s ramshackle barn to make sure everything was just the way they remembered.

Each day in West Head consisted of old-fashioned, imaginative play. Jeremy, Allison and their cousins played baseball on the side of a hill using a long buoy for a bat and a cork for a ball. Mother Nature had conveniently placed rocks in the right places for bases. Sookie, Nanny and Grampy’s golden lab, filled an important position on the team. He stood on duty, ready to fetch foul balls from the briars.

When baseball lost its appeal, they jumped into one of Grampy’s old dories hidden in the tall grass. They loaded it with fishing gear, donned their sou’westers and set sail for the Grand Banks of Newfoundland for a boatload of cod.

There were countless trips to the beach just over the hill. All the children played in the frigid water until their legs and feet were numb and blue. They collected sea urchins, crab shells, sand dollars and razor clam shells. They threw sticks for Sookie to retrieve. At low tide, they explored Bruce’s Island, a children’s paradise.

On rainy days the cousins played hide-and-seek in the house. Each one had a favourite hiding place. The littlest cousin did not completely grasp the goal of the game. If he were not located right away, a squeaky voice called out, “Look under the bed.”

Nanny’s thirty-year-old Monopoly game got lots of use. Jeremy and Jon kept the same game running for days. When one of them lost all his money, the bank loaned more, with no expectation of repayment. The two boys were creatures of habit. Jeremy always chose the boot playing piece and Jon claimed the car.

By mid-August it was time to pack up and return to Ontario because school would begin in a few weeks. They left West Head with enough memories to last until next summer.

This annual family pilgrimage continued until about the year 2000. By then, our children were older and getting summer jobs. This wonderful summer tradition had come to an end. Several years would pass before they returned to West Head.

Earlier this year, another generation struck out on the familiar journey. Jeremy and Allison are excited to return to the little yellow house with the red roof. Nanny and Grampy Roache have both passed away and the torch has passed to Glenn and me. Our children are eager to take their children to the beach to build sand castles and to wade in the frigid water. They want to spend precious hours making new memories with aunts, uncles and cousins.

We are convinced to some degree, that Jeremy and Allison have been kidnapped by Mr. Nostalgia and Mrs. Amnesia. They have completely forgotten what it is like to spend two or three days cooped up in a car with little kids. Glenn and I agree that a healthy dose of restitution is in order. It is time to get even for the dozens of nerve-wracking trips we made with them. But how?

We have used telepathy to imprint the brains of our beautiful granddaughters, Greta and Maddie with vile messages.

We have not forgotten about our super talkative, four-year-old grandson, Isaac. Glenn and I have scoured the internet for questions to plant in his head. These questions have no easy answers. Jeremy and Allison will be expecting, “Are we there yet?” but we have a few surprises in store for them.

Although we cannot be certain, we suspect it will be the longest sixteen hundred kilometres of their lives.  When they reach their wits’ end and cannot tolerate another thing, one of them will become unglued and blurt out, “Just wait until you have children of your own!”

And all will be as it should in the universe. 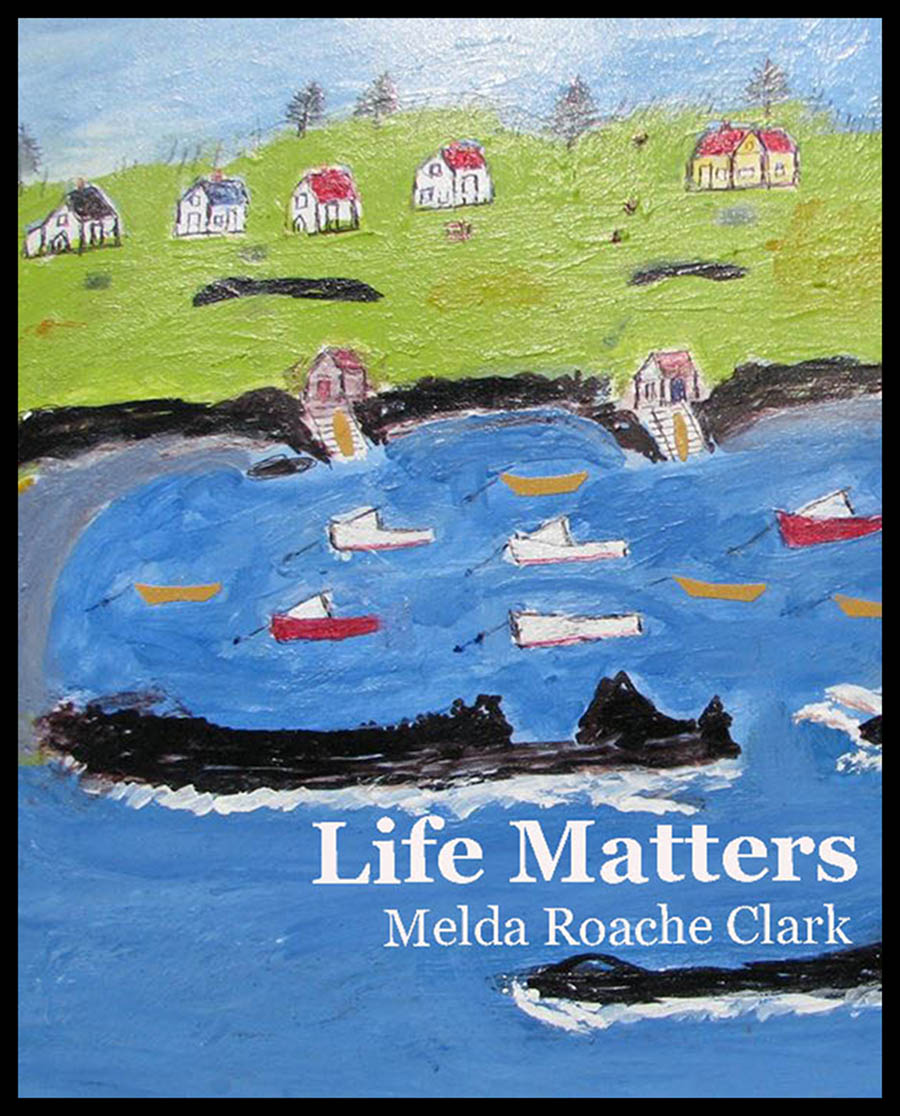 Life Matters is available for $25 directly from Melda Roache Clark at meldaclark@hotmail.com

Her blog is found at Every Day Matters

Please feel free to contact us via the email form on our Contact page or the feedback function at the bottom of most pages.